JACK AND THE BEANSTALK (first version)

IN the days of good King Alfred there lived a little boy,
named Jack,with his widow mother in a very small cottage in which there was
no furniture at all except one wooden stool and a rickety table, so Jack
and his mother had to sleep on the floor, they were so very, very poor,
and this was exceedingly uncomfortable.

Jack's father had been a farmer, but he was dead, and as
Jack was not big enough to dig, and plough, and attend to the farm, and there
was no one else to do it, soon all the money that had been left was
spent.

So then Jack's mother was very miserable, and she told him that he
must take the cow, all they now had left, and sell her. Jack was very
sad, but he was a good little boy and wanted to help his mother, so he
set off. He had not gone very far, when he met a man, to whom he
told his tale. The man spoke very kindly to Jack, and said he would
willingly buy the cow, but that, as he had no money with him, he must
give beans instead.

So Jack took off his hat, and the man filled it with beans, saying that
they would grow to be wonderful plants, and would make his
fortune.

Jack ran home to his mother in high glee, but she, when she saw just
common-looking beans instead of pieces of gold, was very angry indeed, and
threw them out of the window.

Jack was very unhappy, and cried himself to sleep
that evening, but when he awoke the next morning, what was his surprise to see, on looking
out of the window, a wonderful beanstalk, strong and tall, so tall, indeed,
that the top was somewhere right up in the clouds and not to be seen.

"It must have a top," thought Jack, "and I mean to find it."
So he began climbing up the beanstalk, and he climbed and climbed
and at last reached the top, which ought him on to a mountain where
he saw a beautiful fairy who showed him a big Castle at some little
distance, and told him that in that Castle lived a dreadful Giant who
was very fond of roast boy for dinner, but that Jack must behave, and
then he would get a great deal of money, for the Giant was exceedingly
rich.

Jack thanked the kind fairy, and went on to the Castle. There
was a very big door, and he had to stand on tiptoe to knock, and the
knocker was very heavy, but he managed it at last, and then he saw a
face looking out of a window. Jack at first thought it must be the
Giant, but it was only the Giant's wife, a kind woman, who, when she
saw how hungry he was, for he had had no eakfast and had come a
long journey, took him in, and gave him some dinner.

Jack was enjoying it very much, when the Giantess said, looking
dreadfully frightened, "Oh, oh, here comes my husband, what shall I
do; if he sees you he will have you roasted!" Jack was rather nervous
at this, so he asked the woman to hide him, and she put him in the
copper. Then there was a terrible knocking and stamping, and in came
the Giant.

"Fee, Fi, Fo, Fum!
I smell the blood
of an Englishman.
Be he live,
Or be he dead,
I'll grind his bones to
make my bread."

sang the Giant, and his voice sounded like the wind
among the trees on a very stormy day, or like lions in a menagerie at
feeding time, and he walked all around sniffing and snuffing, and peeping
and prying into all corners and places where he thought anyone might be hidden; then at last
he thought he must have made a mistake, and that it was his dinner
he had smelt, and he sat down to the table, and he ate a great deal,
and drank a great deal, and Jack lifted up the cover of the copper, just
a little way, and watched him.

When the Giant had eaten till he could eat no more, he took some
bags full of gold out of his pocket and placed them by his side, and then
he was so tired, that he lay back in his chair and went to sleep.
"Now," thought Jack, "is my time;" so he climbed out of the
copper and crept up to the Giant. He seized the bags of gold and ran
to the window, jumped out, climbed down the beanstalk and so reached
home.

Jack's mother was delighted to see him again, and very much
astonished and pleased was she when she saw the gold.
Now while the Giantess was feeding Jack, she had told him of a
wonderful hen which her husband owned, which, she said, laid golden
eggs. Jack thought, "If we had that hen we should never be poor any
more."

So next day he climbed up the beanstalk again and went to the
Castle. This time no one was at home, so he took the hen and got
back safely, although she cackled so loudly that he thought the Giant
must hear, wherever he might be.
And once more Jack went to the Castle, this time to fetch a lovely
golden harp which sang beautiful songs when it was told. He got into
the Castle all right, and took the harp while the Giant was having his
afternoon sleep.
But the harp began to call out in a very loud voice,

And the Giant DID wake, and he rushed after Jack with his dreadful
club in his hand. Jack came to the beanstalk and clambered down as quickly as he could.

As he got to the bottom he felt the stalk swaying terribly, and, looking up, he saw that
big, fierce Giant coming down after him. Jack's mother came running out of the cot-
tage, and she fetched a hatchet, which she gave to Jack, and he hacked
away at the beanstalk and at last cut it right
through. Then it came tumbling down, and the Giant too, and he fell
on his head and was killed dead as a stone.

So Jack and his mother now had enough and to spare and lived happily the rest of their days.

A note from the author:

If you just got to this Web site: it has more fairy tales, instructions for cat's cradle, and a book about an American girl who goes to boarding school in England 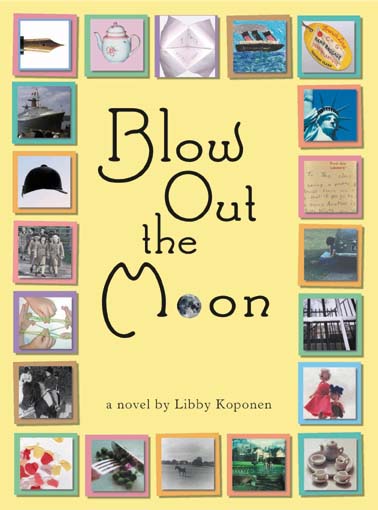 To start the book at the beginning, go to either:
Chapter One (the beginning of the published book)

OR the old chapter one, which some people hated and some people loved: "Chapter I. The Adventure of the Very Loud Living Room."

What do you think? My email is LibKoponen@aol.com

If you got to this page from Chapter Two, I'm glad you like the story so far and I hope you keep reading! And remember, if you draw a
picture of the story and send it to me I will put it on the site, if you give me permission.

How to send me a picture you draw:

You can order the book Blow Out the Moon from barnesandnoble, amazon, etc. or, starting in June, buy it in bookstores.

Go back to the list of chapters and stories